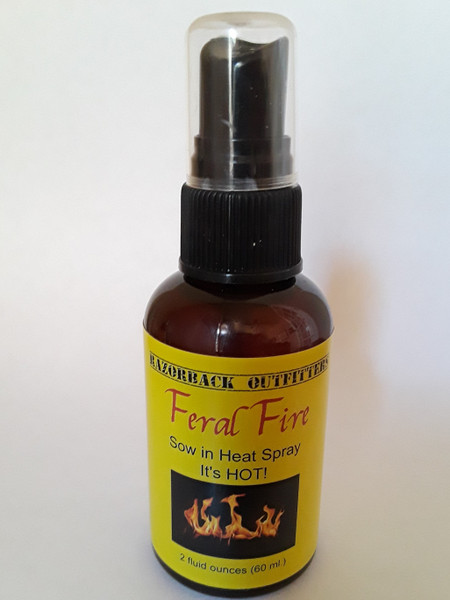 Made right here at Razorback Outfitters!

This potent sow urine has all the magic it takes to put that trophy boar in the hot seat!!! If your goal is to convince that old boar hog that his girlfriend's in town, then Feral Fire is the ultimate item for your bag of tricks. All of our scents we make in house come in a 2 oz. fine, misting spray bottle.

Does it work, you ask? Check out these testimonials:

Hey there, just came back from a hog hunt in south carolina with two other guys.  In 2 1/2 days we killed 8 hogs.  There were six other guys hunting there also and they shot 7 hogs.  We used both the gel and spray.  I had hogs 40 yds away with the wind going right to them and they never knew I was there in until it was too late.  LOL  When we were packing the hogs in the coolers, one of the other party came over and started b/s ing and said you guys did real well.  We only shot 7 for 6 guys.  Then I let him in on what we were doing and i gave him the rest of the sow in heat and he could not beleave it.  Even the guides said that's the best they have smelt and the first time they saw it.  Thanks again, will be in touch.  Next hunt is not until sept. - Wally Johnson

I sprayed two pumps out both side windows of my box with your new Feral Fire at dark, watching my feeder at 117 yds with my scope, it pulls in more light.  And just like a picture, a perfect siloutte of a large boar head appears in my scope! He was 20ft in front of me! Second biggest hog I've ever killed , 250lbs..wow!  This stuff works...going back this weekend to try it again!! THANKS Charles Wallace